On 2 May 2005, Jürgen Bohnert discovered a strong air draft in a doline (called “Hessenhaudoline”) situated between Blaubeuren and Berghülen. At this time the main river cave behind the Blautopf Resurgence – called „Blautopf Cave“ – had been explored by cave divers from „Arbeitsgemeinschaft Blautopf“ until the first boulder choke – almost 2 km from the Blautopf Resurgence. It was heading further North, so it seemed entirely possible that it would extend to Hessenhaudoline and that a connection to the main river cave could be made from the surface. After thorough examination of the air draft it was established that this was in fact barometric cave wind, suggesting a huge air volume underneath the surface. 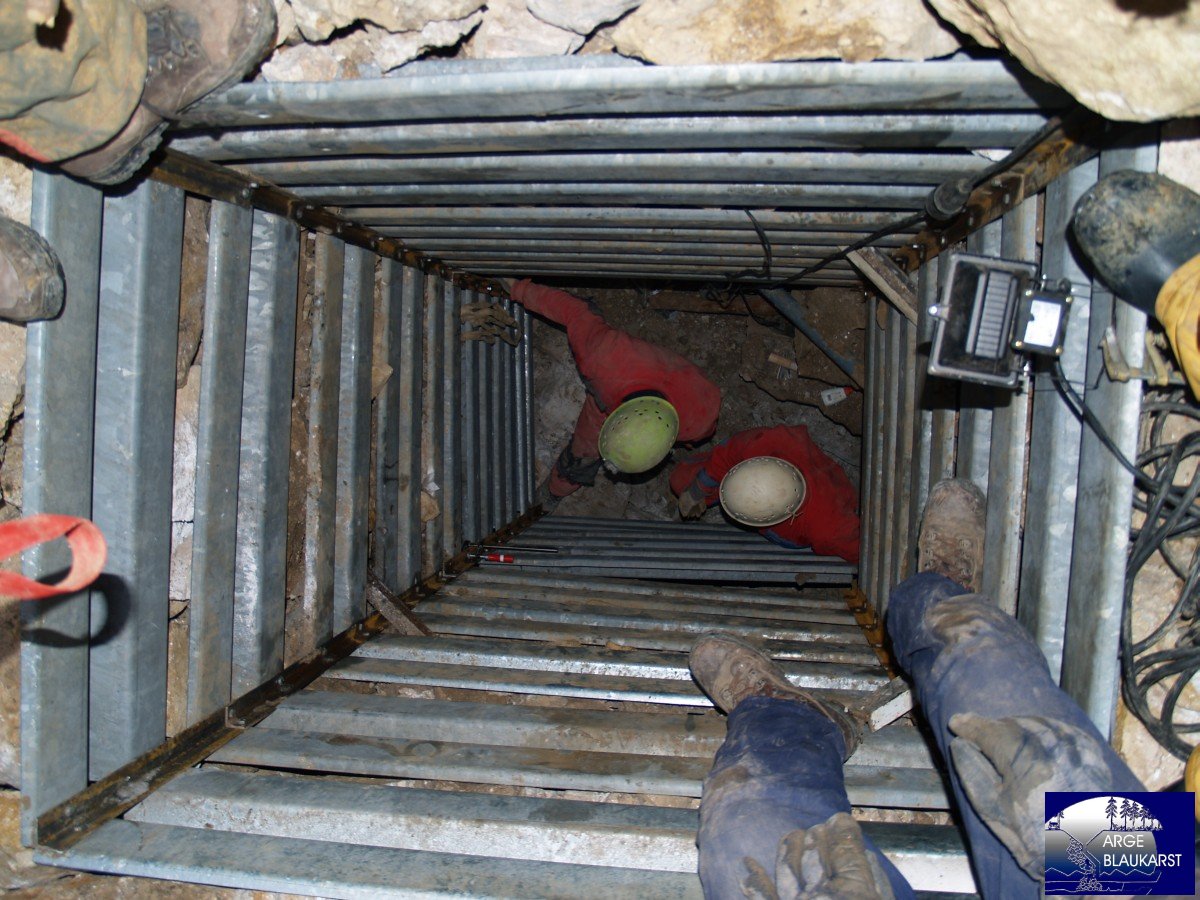 After only one year of digging the cavers had reached a depth of 30 m below entrance and broke through into the first natural cavern. While this 10 m by 8 m wide room (“i-Punkt-Halle”) ended in a boulder choke, it provided a more than welcome opportunity to store debris from the deeper parts of the dig, considerably facilitating the subsequent work.

Moreover, the underground dig did now formally qualify as cave and it was named accordingly „Hessenhauhöhle“ or – in English – „Hessenhau Cave“.

In the summer of 2008 another air draft was discovered behind a little crevice situated in an area called “Seligengrund” north of Blaubeuren. So the group decided to carry out a second dig. This permit was granted, too, and so on 9 November 2008 the second project was started. After only a few days, members of the team broke through into Seligengrund Cave. At present, the cave is 330 m long and 99 m deep and the search for a connection to „Blauhöhlensystem“  is going on. 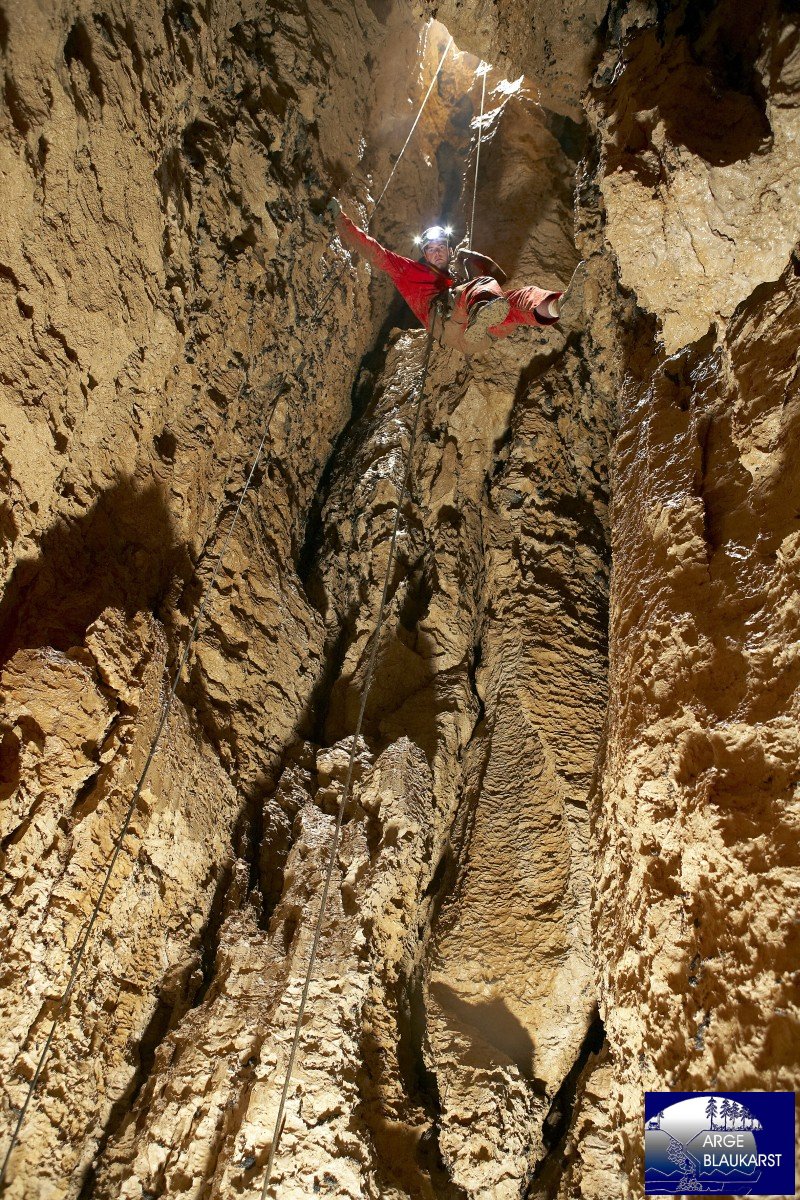 In the meantime, work at Hessenhau Cave was continued, however, progress was slower since the air draft was lost on the further way down and only rediscovered at a depth of 50 m. Moreover, another dig much closer to the Blautopf, initiated by members of „Arbeitsgemeinschaft Höhle- und Karst Grabenstetten“, led to the discovery of a huge cave – called „Vetterhöhle“. This cave was subsequently connected to Blautopfhöhle, thus requiring a new name for the overall system, which was agreed to be  „Blauhöhlensystem“.

In March 2010 a dark void was discovered in Hessenhau Cave beyond a little hole at a depth of 55 m below the entrance and it was found that a major discovery had been made. A series of small pitches – interupted by impassable crevices which had to be enlarged – led the team to a depth of 127 m where progress was halted for several months due to an extremely tight cave passage which had to be tackled by means of hammer and wedges.  Finally, on 26 Mai 2011 a major breaktrough took place. A party of 4 team members was able to survey 200 m of small streamway passage that suddenly opened up into a huge – 15 m wide – river cave. 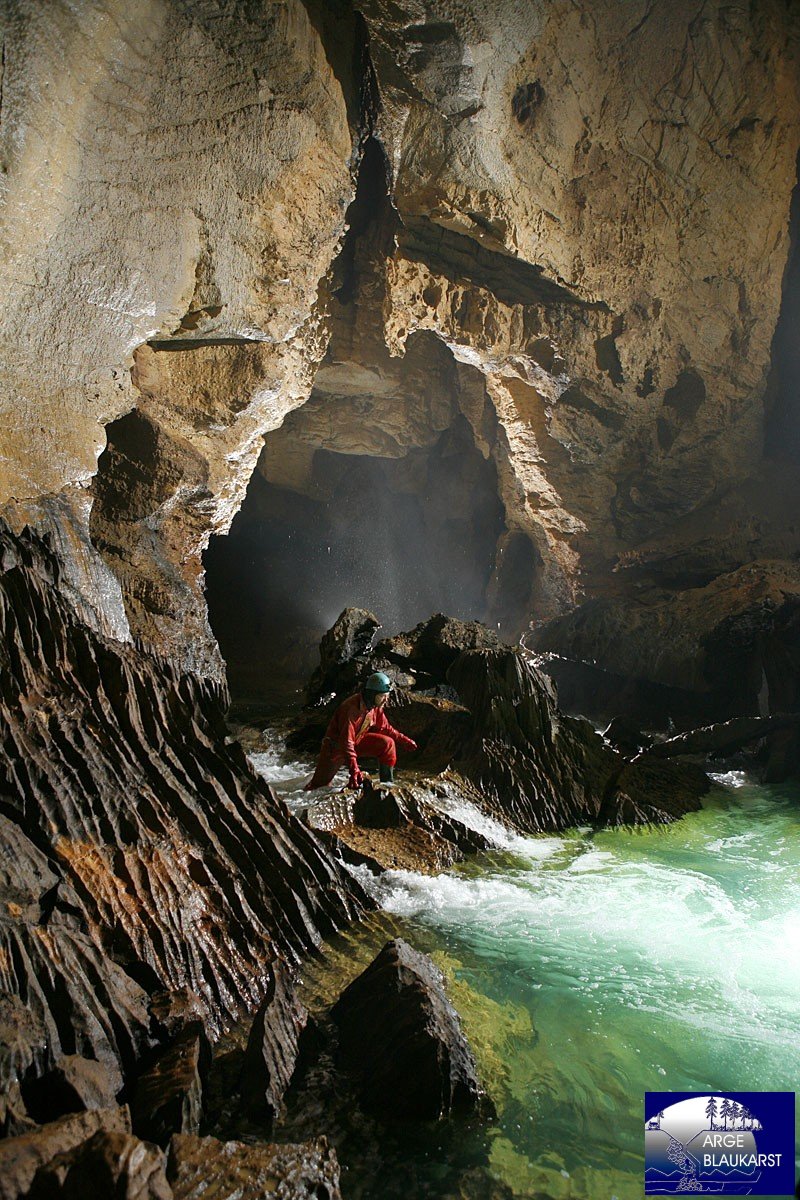 The connection with a major part of the cave system behind Blautopf Resurgence had been found – yet this branch was completely unknown! While subsequent dye tracing clearly demonstrated the hydraulic connection, it also showed that two independent underground rivers (Ur-Blau and Nordblau) are flowing through Blauhöhlensystem and Hessenhau Cave, respectively – each providing about half the water surfacing at Blautopf Resurgence.

Subsequent exploration revealed a beautifully decorated river passage, blocked by a sump about 400 m upstream and another one about 50 m downstream. 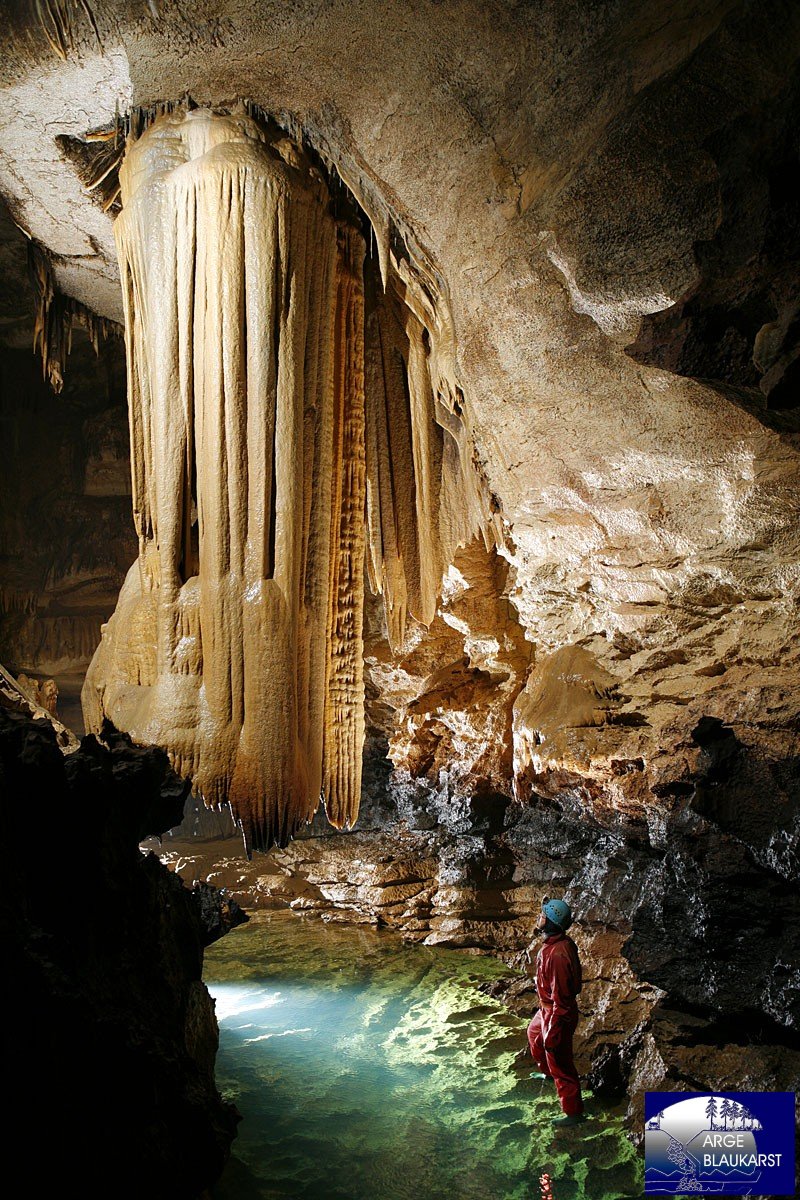 Upstream, cave divers passed a total of three sumps, surveyed about 1700 m of main river passage and discovered some beautifully decorated side-passages.  No end has been reached, so far. 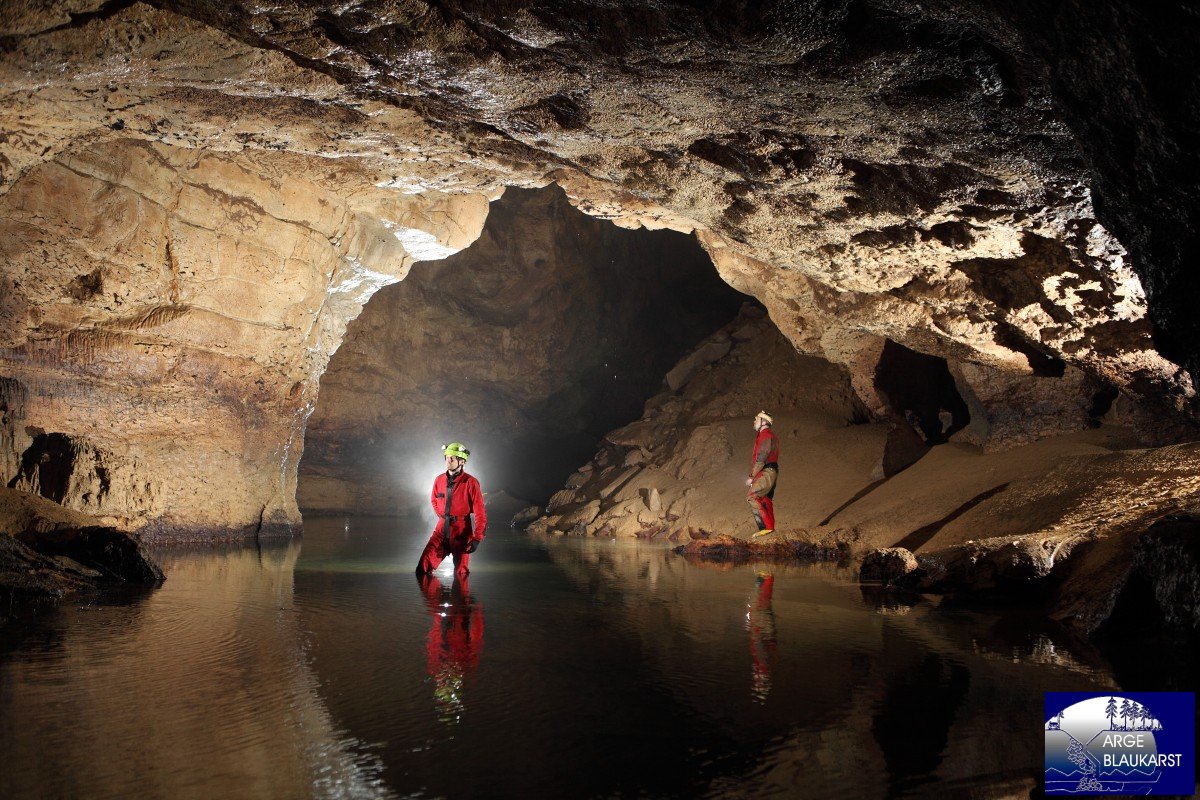 Downstream, 1500 m of passage have been surveyed. After 3 sumps had been passed an underground camp was established. This forms the advanced base for further downstream exploration. Another 2 sumps could be passed and the current limit of exploration stands at sump 6. Although the visibility in the upstream sumps is generally excellent (>10 m), it is close to zero in the downstream sumps, due to the silt that is inevitably being kicked up, while walking in the underground river. Hence,  progress in these up to 15 m wide underwater tunnels is relatively slow in the downstream section, yet dive time very limited due to the tiny size of the dive tanks which can be carried to these remote places. Therefore, a lightweight (8 kg)  and very compact passive-addition closed-circuit rebreather – named “Raycy” – was constructed, to carry out the exploration dives further downstream and to establish the connection with Blauhöhlensystem, which has yet to be found.

Not only is this sidemount rebreather very lightweigth and rugged, it can also be manufactured relatively cheaply due to the simple design based on commercially available as well es customly designed parts. Due to the harsh environment, a leak of the rebreather loop cannot be ruled out, so the unit was designed with full flood recovery in mind. Moreover, the dive sites are so remote from the entrance, that the rebreather had to be enabled to be staged inside the cave for extended periods of time, which required completely new strategies to preserve the integrity of the rebreather and to ensure its safe function. 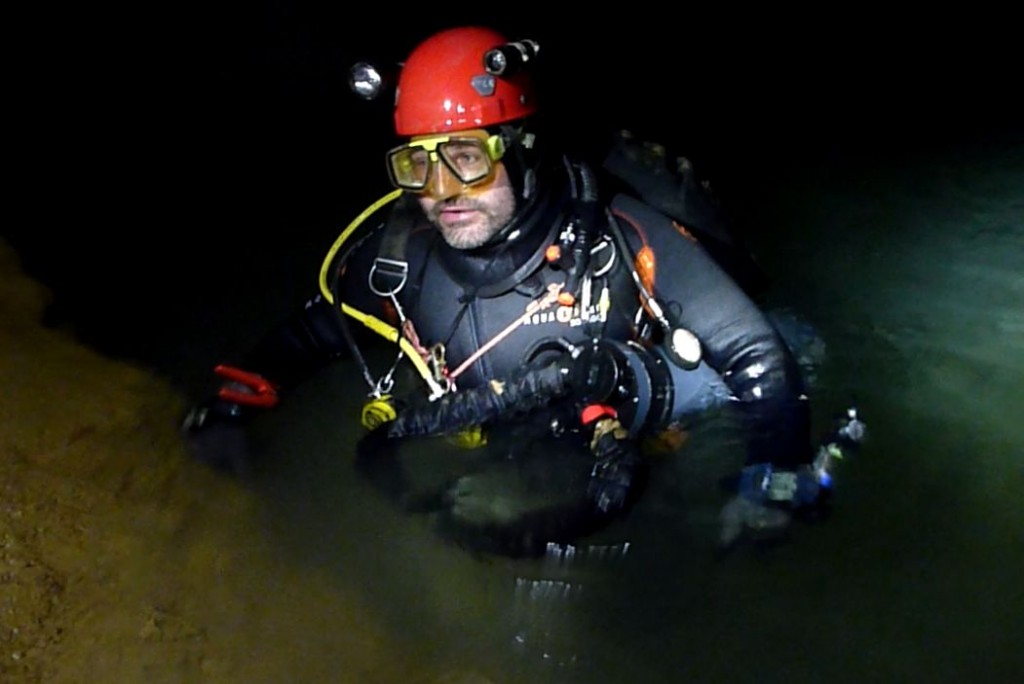 The current length of Hessenhau Cave stands at 4 km and the depth at 148 m below the cave entrance, making it the deepest cave in the Suabian Jura. A connection with Blauhöhlensystem (current length 11 km) would probably make it the longest cave system in Germany. 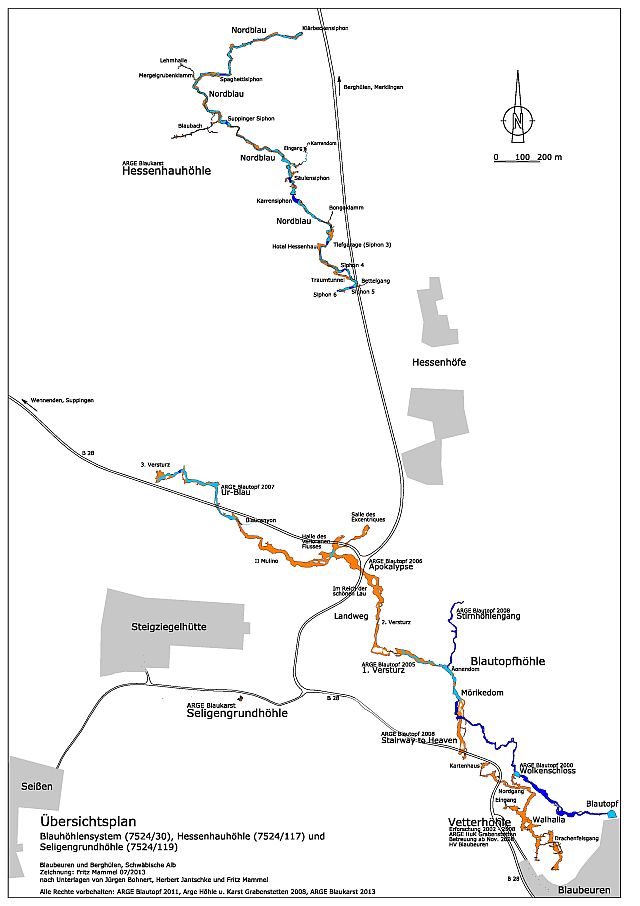 Check out the new article on the hydrology of Hessenhau Cave and Blauhöhlensystem and our dye tracing experiments.

More photos of our underground digs and the newly discovered caves can be found in our gallery.

Back to the Introduction